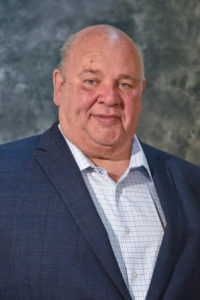 Cicero Town President Larry Dominick is a 50-year resident of the Town of Cicero. A graduate of Morton East High School, Dominick attended Morton Community College before entering public service to the people of the Town of Cicero. After 14 years of working in the Cicero Streets Department, Larry joined the Cicero Police Department. He retired from the Police force as Deputy Superintendent after 20 years of service to the community. In 2005, Dominick resumed his public service to the Town of Cicero, winning election to a four year term as Cicero Town President in February 2005. He was sworn into office on May 10, 2005 and has won re-election with overwhelming support from the residents ever since.

Longtime Supervisor Joe Virruso, who has served under eight Town Presidents, has said that “Larry Dominick has done more for the Town of Cicero than all of his predecessors combined.”

President Dominick is the longest serving Town President and Chief Executive Officer in the history of the Town of Cicero, serving since 2005.

Under his leadership, Dominick has made safety his number one priority. In 2010, Cicero was named among the top 20 Safest Cities in America by House Hunt Online. Reflecting that achievement are the crime statistics which show that street gang violence has been significantly reduced in the Town of Cicero. By strengthening the Police Department, making community residents more involved in local community activities and providing services and programs to our youth, street gang violence has dropped from more than 65 shootings and 14 gang related killings in 2004, the year before he took office, to as few as 3 shootings and 1 death each year.

“I won’t be happy or satisfied until we are able to eliminate all crime, all shootings and injuries and all deaths as a result of street gang violence,” President Dominick said during his 2021 inauguration to his 5th term as President.

As safety increases, Cicero has become a magnet for attracting new businesses that bring thousands of jobs to our residents and property and sales taxes that help off-set the burden on Cicero Taxpayers. These new businesses include Wirtz, Walmart, Amazon, Golden Corral and more.

Additionally, President Dominick has overseen the implementation of services and programs to support families, the Town’s youth and local schools. He launched the Parent Patrols program which supports our school children as they go to and from school every day and are apart of the Town system to improve safety for all. And CIcero has a translation department to provide Spanish Translations of all important English-language documentation. The Town’s Newsletter, which is distributed to every addressed home in Cicero is published in both English and Spanish and outlines of all for he month’s activities and all town services.

President Dominick is proud that the expansion of  services to residents has been done without having to raise taxes and through professional management of Town resources.

President Dominick has previously volunteered his time with the Berwyn/Cicero Youth Baseball League, and has served on the Cicero Police Pension Board and the Morton 201 High School District Board. He helped re-launch the Town of Cicero’s New Chamber of Commerce which is led by a volunteer team of independent business leaders from Cicero.

Dominick has two adult sons, Brian and Derek, and he has three grand children. Derek has worked in Cicero for many years and currently serves at the Department of Public Works and he has two children, Danielle and Jacob. Brian works at District 99 and has one son, Zachary.