Cicero residents were reminded of the efforts of the Rev. Dr. Martin Luther King, Jr., during a special ceremony on Jan. 14 at the Cicero Community Center.

Kasumba “Kal” Lwanga, vice president of J.S. Morton High School 201’s Board of Education, touched on the important and lasting work King accomplished while marching in locations like Birmingham and Selma, Alabama, as well as nearby in Chicago.

“Dr. King fought for more than the civil rights of African-Americans,” Lwanga said. “He worked for the equal rights of everyone, no matter your skin color or economic status. He was about uniting us as a nation towards the betterment of each other.”

Joining Lwanga was Chris Vallillo, an award-winning folk singer and storyteller, who recounted the history of the Civil Rights Movement from the 1960s on. Vallillo’s remarks were mixed with music as a way to illustrate the struggles and accomplishments of the movement.

“We always hear about the deep divisions in this nation,” Dominick said. “But unless we get together, try to understand each other and celebrate what makes us different, we will not be able to bridge those divides. That’s why I believe it is important that we honor as many of the cultures that reflect this town as we can. Commemorating Dr. King enhances that need.”

King was a civil rights activist and minister who was instrumental in the passage of multiple civil rights laws in the United States. In the months and years before his assassination, the Baptist minister worked to bring attention to the poverty and housing crises that were impacting minorities throughout the nation, especially in northern cities like Chicago. He was gunned down on April 4, 1968, in Memphis by James Earl Ray. 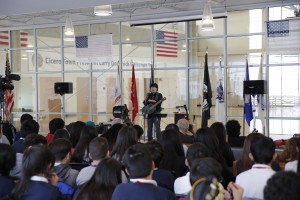 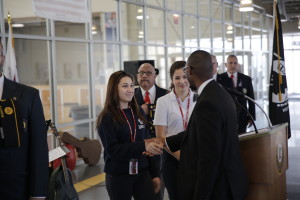 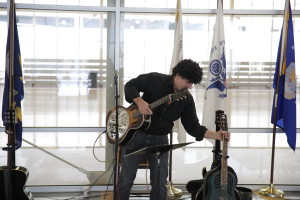 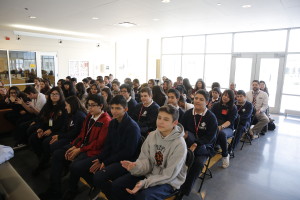