A Cicero firefighter was hospitalized suffering from what is being described as a serious case of smoke inhalation while fighting a fire at a two-story home in the Town of Cicero Saturday afternoon.

The home fire at 2112 61st Court was called in at 3:45 PM and caused serious damage to the property. It was quickly extinguished and no members of the family living in the home were injured.

But Cicero officials said that Firefighter Ted Polashek, 44, was seriously injured when he inhaled heated smoke. He was taken to MacNeal Hospital and later transferred to Lutheran General Hospital Saturday night where he was being intubated.

“Every day, firefighters risk their lives to protect families in the Town of Cicero and around the country and our prayers are with Ted Polashek and his family for a full recovery,” Town President Larry Dominick said Sunday.

Cicero Fire Chief Dominick Buscemi said Polashek has been a fire fighter for more than two decades and the Department is hopeful that he will come through his injuries.

“There is always a risk but that risk that we face never stops our firefighters from taking on the fires and saving lives,” Buscemi said.

“He is a great firefighter and we know he is strong.”

Polashek, a 20-plus year veteran firefighter, was working on ventilating the roof during the home fire when he was overcome by the smoke and super-heated gases. 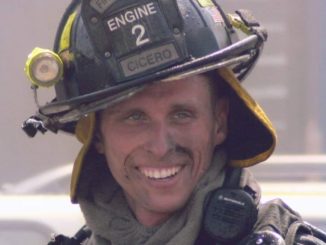